Hey Adventurers, you remember our friends DLR Group from our Adventures through Washington, D.C. and recently Cleveland, Ohio. They are masters of design, preservation and restoration of beautiful buildings – which may have something to do with why we get along so well!

Because we cant stop geeking out over the topic, we are kicking off a storytelling series called “In The Details” where we will uncover hidden architectural attributes and explore stories of restored cultural institutions all over the world. Some of which, DLR Group had a hand in restoring, and others that just are too amazing not to share.

So with that, we begin with the tale of a massive – but somewhat secret – detail, the mighty organ at Severance Hall (which may or may not be hidden in plain sight.) 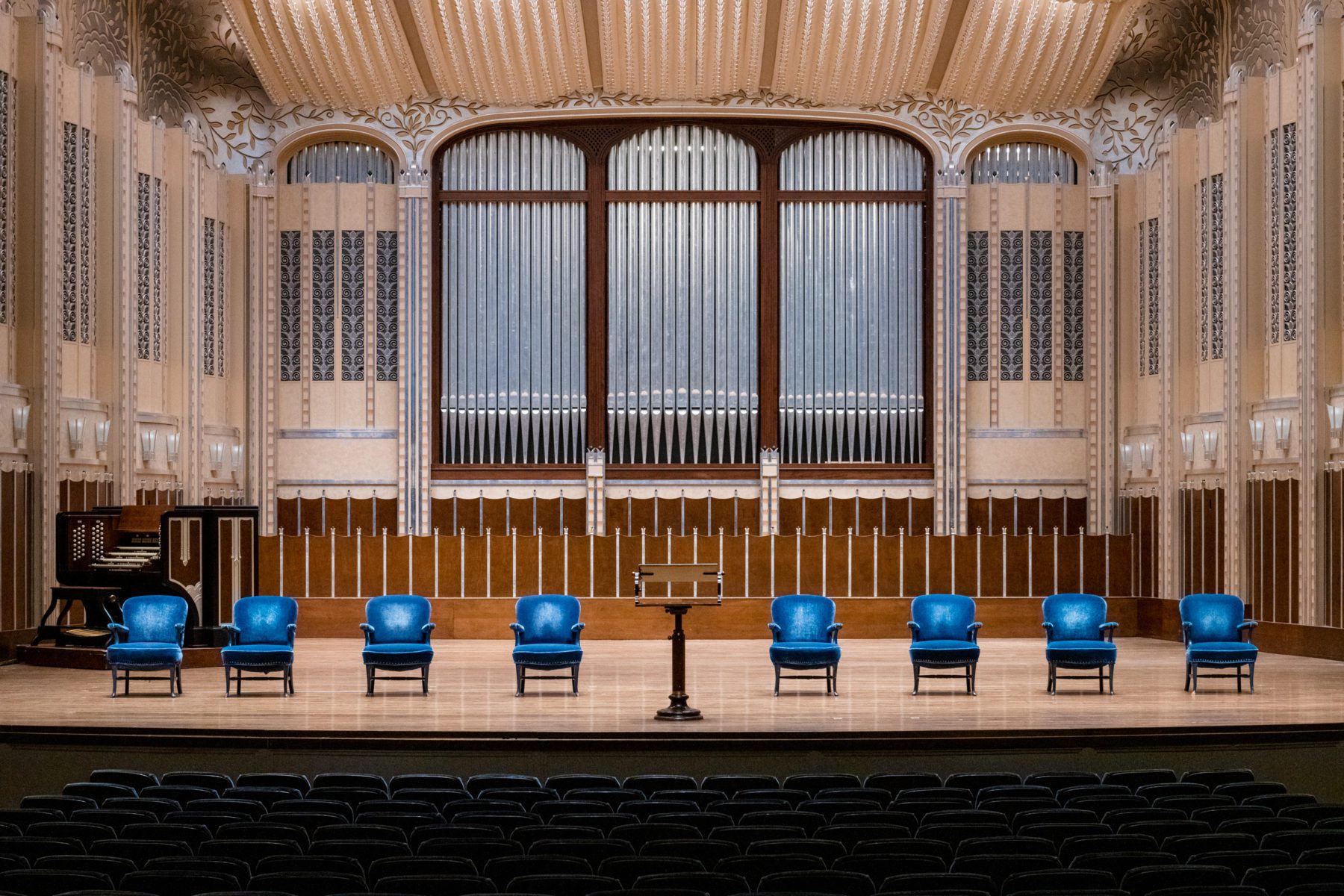 Even with the elegant laced ceiling and Art Deco patterns to distract the gaze, one can’t help but be immediately drawn to the massive silver pipes at the back of the grand stage. These mighty towering tubes, however, are not part of Severance Hall’s organ.

While the ornate scene certainly provides the visual accompaniment to any performance of the renowned Cleveland Orchestra, the panels of pipes are actually a façade hiding the real Norton Memorial Organ, located behind the illusory backdrop. These fake panels can actually be removed to reveal the true organ, which has only been done for a few operas that have taken place at the hall.

With pipes ranging from 7 inches to 32 feet tall, the  Norton organ is renowned as one of the best in the country. It’s a behemoth of an instrument, weighing 50,000 pounds and composed of 6,025 pipes, generating a mighty sound for any orchestral performance or a chilling entrance for Nosferatu during the hall’s movie nights. The organ, however, has not always been the centerpiece of Severance Hall’s stage, and it’s only recently that audiences have been able to enjoy this mechanical masterpiece. 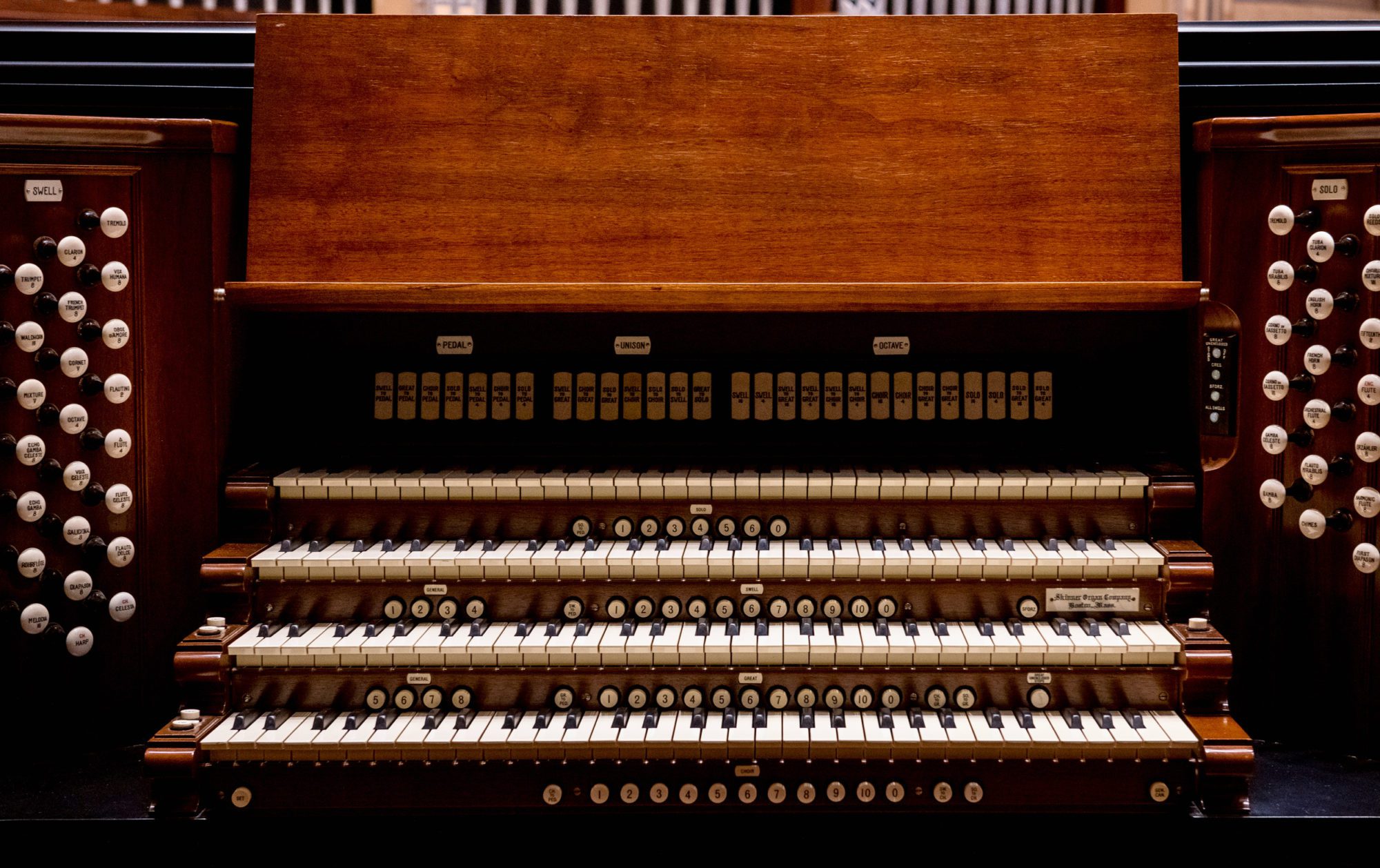 Built specifically for Cleveland’s hall, the organ was constructed in 1930 by the E.M. Skinner Company – Considered the best organ builder in the nation at the time. Ernest Skinner was a brilliant mechanical engineer, pioneering new technology for the piped instruments with an electro-pneumatic switching system in the early 20th century. Along with Severance Hall, Skinner and his company designed organs for many massive spaces around the nation including the Scottish Rite Cathedral of Indianapolis, the Washington National Cathedral, and the Rockefeller Memorial Chapel at the University of Chicago.

From its first performance, however, the Skinner organ at Severance Hall could barely be heard by audience members. Originally housed in a chamber above the main stage, the large flue designed to allow for a commanding roar provided barely a whimper. Acoustical issues abound, with mics and electric amplifiers were used with little success to try to amplify the organ’s sound. 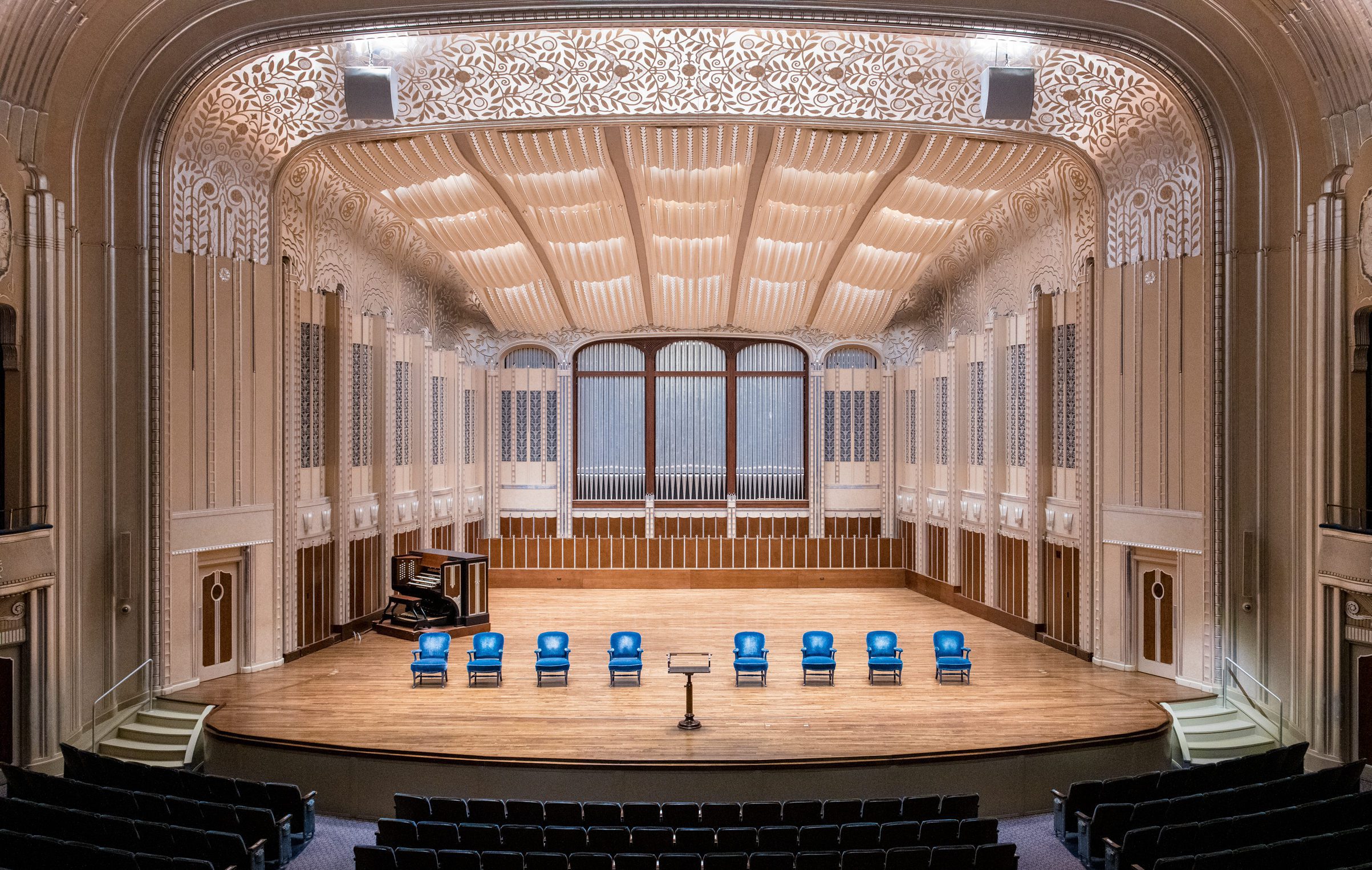 In 1958, in an attempt to improve the hall’s overall sound, Cleveland Orchestra director George Szell essentially entombed the Norton organ with an acoustical shell. While “Szell’s shell” improving the quality of the orchestra, it further diminished any sound emitting from the giant organ. By 1976, the organ was no longer used in any orchestral pieces.

However, after two decades, the sleeping giant was awakened from its long slumber. With a massive renovation of the hall, an enormous hole was cut into the back of the organ’s musty chamber, and piece by piece, each of the 6000+ pipes were transferred to their new home behind Severance hall’s stage. Over the course of 3 years, each pipe was restored by the Schantz Organ Company and by 2000, the organ was fully re-installed. With no obstruction of sound for the first time in it’s life, the playfully hidden piece could now bellow notes for all audiences and performers to hear.

The only organ of its kind to be fully restored in the United States, the Norton Memorial organ is an excuse in itself to visit Severance Hall’s chambers (though the orchestra ranked 7th in the world is not too shabby). Though hidden by a false veneer, the organ has been born again in it’s 21st century chambers, and there’s nothing counterfeit about it’s sensational sound.