If you’ve been to New York City, there is a good chance you had to cross a bridge to get there.  The City, made up of islands, is home to over 2,000 bridges and tunnels. (A lot more than we thought!) Not just essential to city dwellers, these bridges are a major part of the city’s history – each one playing its own important part and purpose. We spent a few days tracking down some of the more unique examples of the spans in and around NYC and were amazed at what we discovered. 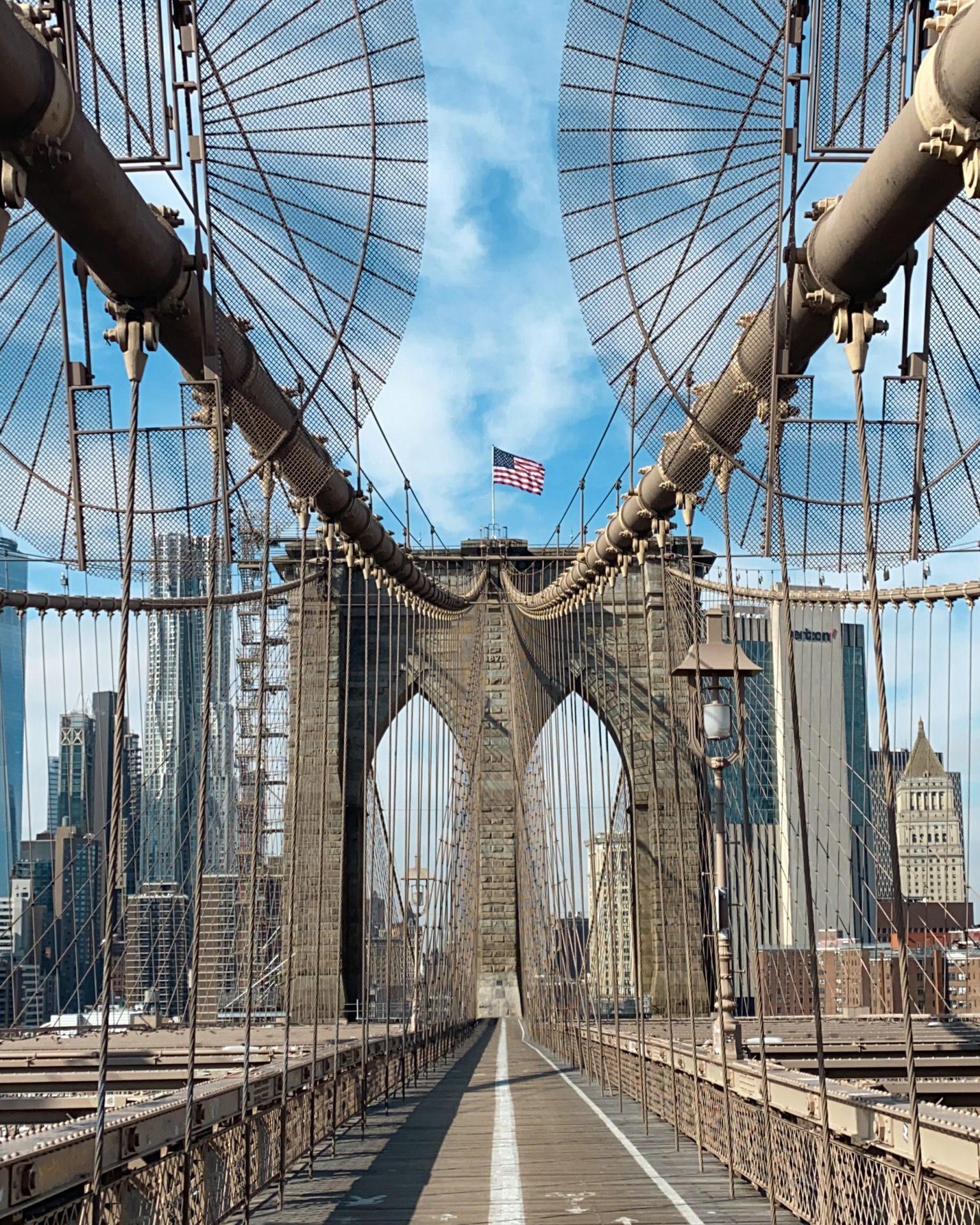 The iconic span of the Brooklyn Bridge has connected the boroughs of Brooklyn & Manhattan for more than a century. It is a genuine marvel of ingenuity that came to exist thanks to a fateful female engineer. Upon opening, it was the longest suspension bridge in the world, but its legacy is not just due to its impressive length, but also the unprecedented quality and condition of materials utilized in its construction.

The Brooklyn Bridge was the first major bridge in the world to employ steel. This feat of functional necessity was then enriched by magnificent design. With gothic arches that rise “like majestic cathedral windows,” the structure not only symbolized the era’s optimism, but stood as a work of art in its own right.

Starting around 1800, engineers presented various designs, including chain and link bridges, but each option was rejected due to the inevitable challenges of building a fixed-span bridge across the gleaming East River. But in 1867, a bill was passed allowing the construction of a suspension bridge, and John. A. Roebling, a prolific designer of wire rope suspension bridges & aqueducts, was named the lead engineer.

Roebling’s son, Washington, served as chief engineer during the project’s fourteen year construction, but it was actually his wife, Emily Roebling, who assured that the Bridge was completed.

When Washington became severely ill, Emily stepped in to oversee construction efforts. When the glorious span was finally complete, she was the first to cross the bridge in a carriage—with a rooster in her lap—a well-deserved victory lap for both the bird who heralds the dawn, and the engineer who became known as “the woman who saved the Brooklyn Bridge.” 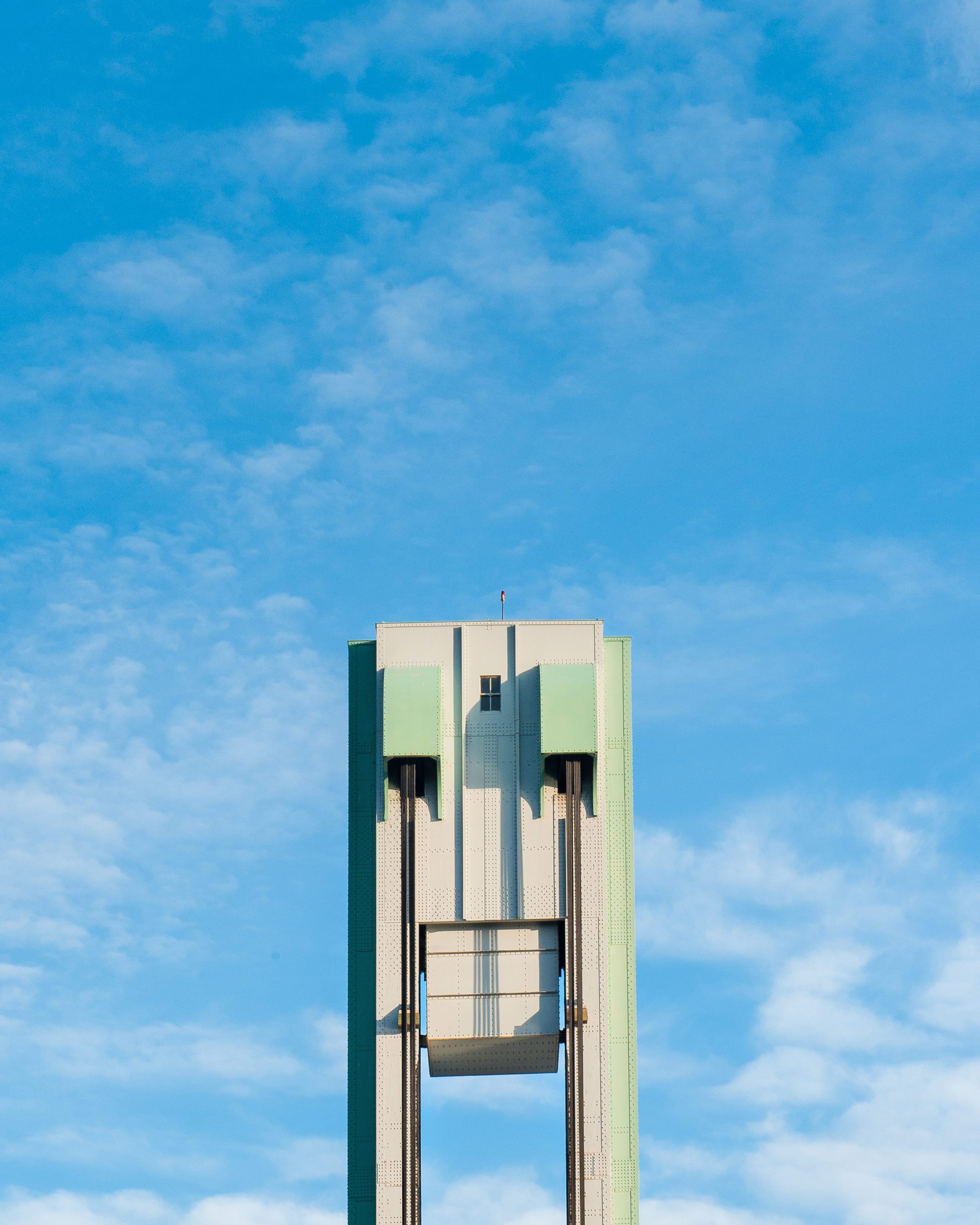 “In bridge designing, the aesthetics are quite as important as engineering details. It is a crime to build an ugly bridge.” Master bridge engineer, Othmar Hermann Ammann immigrated to New York City in 1904 and ultimately became responsible for more than half the bridges that connect the City to the mainland – including the Ward’s Island footbridge.

The first known bridge to Ward’s Island was a wooden drawbridge on the northwest corner of the island, but that only lasted 14 years – Ammann’s new generation take on an old classic has been standing for over a Century. The green & metallic cantilever bridge over the east river was completed in 1909 with a total of twelve spans consisting of steel towers & girders – every angle achieved with unique fine-line designs.

To-date, this slender specimen remains the only permanent bridge serving solely pedestrians & bicycles – providing a ‘low carbon footprint’ this is truly a throwback that seems to have gained further meaning with age. 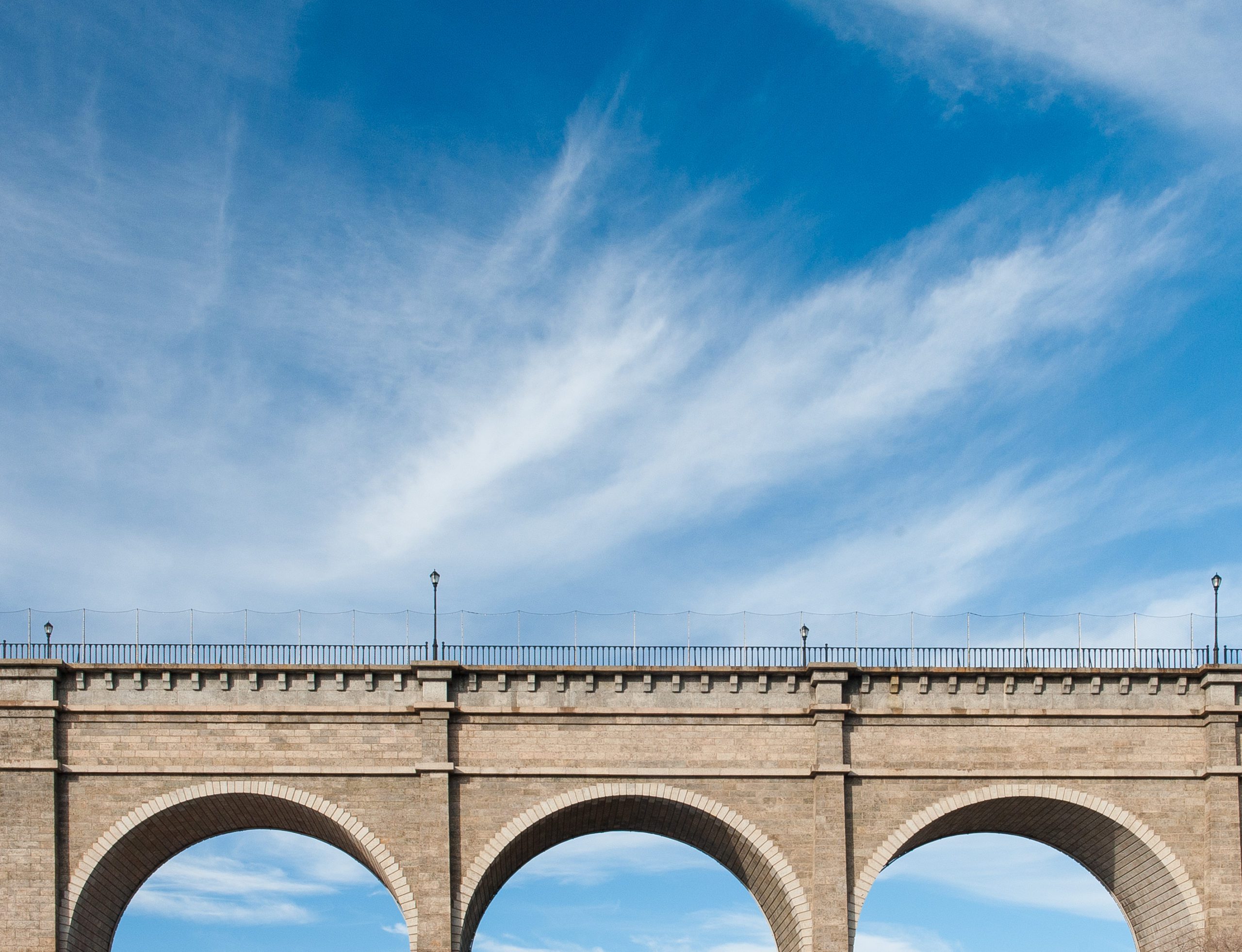 In the mid-1800s the Croton Aqueduct began to pipe clean water into New York City – the first of it’s kind. To facilitate the flow of fresh water over the Harlem River, the oldest standing bridge in the metropolis was born: The High Bridge.

This method required major design decisions, and every angle was explored with great attention. A low bridge would be simpler, faster, and less expensive to construct, but would likely impede passage on the river – thus, a high bridge was constructed aptly reflecting the appearance of a Roman aqueduct with 16 individual stone arches spanning 1450 feet (440m).

With a striking attention to detail, the bridge was built to be elevated at a slight angle to allow gravity to naturally move the water, while concealing the pipes within the design. But as functionality evolved over the years, so too did the form of the structure itself.

In 1928, as to ensure easier passage of maritime vessels below, five of the original stone arches were replaced with a single 450-foot (140m) steel arch – an adaptation the New York Times called a “triumphant compromise between art and utility”. The combination of contrasting textures and diverse materials can be examined today by pedestrians ambling across the bridge once built for water. 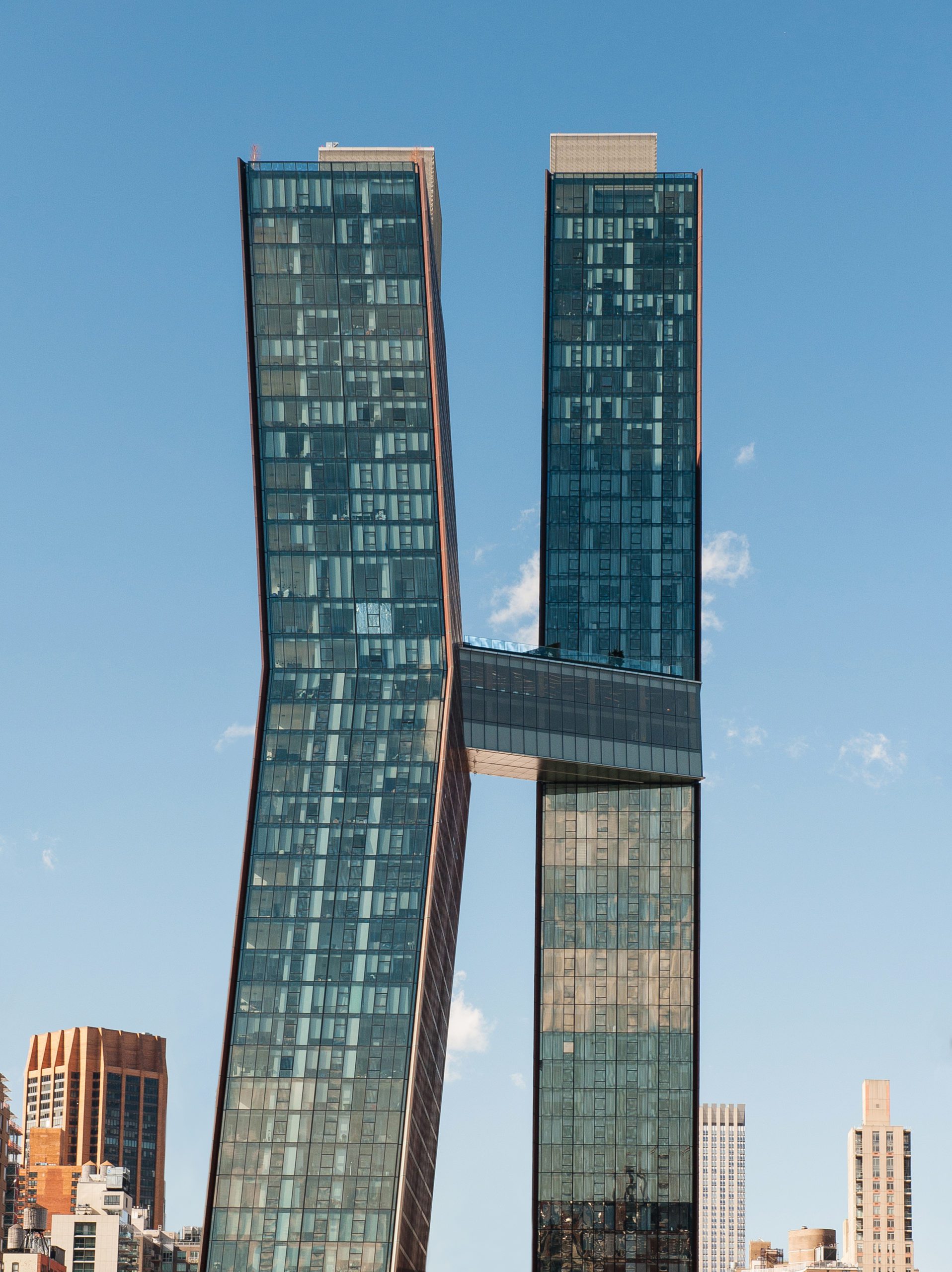 The tallest copper-clad structures in existence reside on the East Side of Manhattan, bringing a bold new form to a relatively architecturally uncomplicated neighborhood. The authentic precision and attention to detail was influenced and informed by practical functionality while aesthetic decisions were driven by eventual visual contrast.

Over time, the metal cladding of the ‘dancing’ buildings will change almost entirely – acquiring a matte green patina reminiscent of the Statue of Liberty. At the same time, the three-story skybridge – the highest in New York City and the first to be built in almost a Century – will continue to shine thanks to its impressive specialty glass, developed specifically for the project.