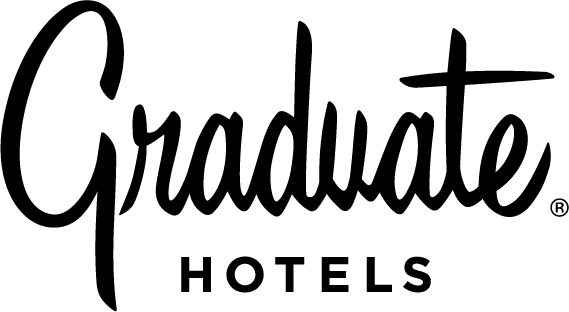 Harken back to the Roman and Viking ages and you’ll find the first evidence of Cambridge emerging as a central trading city. Fascinating history isn’t hard to come by in this storied town, no matter if you find yourself there as a student or tourist. You may have heard of its namesake school, as well, the second-oldest university in the English-speaking world, established when a group of scholars leaving Oxford decided to start a scrappy, rival school. Over eight centuries later, here we are, travelers through the course of ancient history in a town that’s friendly but fierce, with more than a few stories to tell.

Dust off your textbooks

Relive the glory days at Graduate Cambridge, a thoughtfully crafted and deeply researched hotel that feels more like a seamless extension of the nearby university. With a history-centric design, the hotel reflects the culture and tradition of its town, from the DNA double helix chandelier to the famed, century-old punting boats gracing the lobby walls. With a modern twist, Graduate Cambridge reflects the world around it, providing a perfect resting place along the River Cam, in the center of the city, and at the heart of any adventure in this storied town.

This museum is home to half a million pieces of art, but the most famous of all are the ones that shattered. In 2006, a visitor tripped and fell, shattering three ancient Qing Dynasty vases that had been on display since the end of WWII. Charges were dropped and the vases were restored, now sitting safely behind security glass.

Upon returning from his famed Beagle voyage, Charles Darwin found himself wary of the social and scientific pressures from his family and colleaguesSo he hid out in this Cambridge home, sifting through his research, covering all available surfaces with piles of notes and letters. What emerged was none other than his renowned “Journal of Researches”.

This bridge may look like an arch, but everything in it is stick-straight. Built to an unusually sophisticated design and once rumored to have stood without the aid of nuts and bolts, its designer was thought to be the genius mind of Sir Isaac Newton. But it would have been a bit difficult for even a man as smart as Newton to resurrect from the grave to build this architectural wonder.

Founded by Margaret of Anjou in 1448 and refounded by her royal rival Anne Woodville in 1465 (after Margaret and her husband, King Henry VI, had been deposed), the college’s name reflects that it was influenced by two monarchs with some English grammar—it’s officially known as Queens’ instead of Queen’s. With the blessing and patronage of these two royal ladies, the college quickly grew with its iconic red-brick structures, including one of the earliest libraries in Cambridge. Living up to the name “The Old Library,” Queens’ College didn’t have the funds to re-bind their books in the 18th century like other college libraries, and so today students and visitors alike are treated to books and manuscripts held by their original binding. Probably best not to check those out of the library.

Made famous initially for their Fitzbillies sponge cake, this bake-shop now reels in the customers with its Chelsea Buns. Slinging them out 362 days a year by a woman who’s made 5 million of ‘em by hand after 50 years behind the counter.

Whipple Museum of the History of Science

Today the Whipple Museum hosts one of the most extensive collections of scientific instruments, apparatuses, and models. The founder? None other than a man who got his start working for the youngest son of Charles Darwin.

Comb through the libraries of enough dissolved monasteries, and you’re bound to stumble upon a hidden gem or two. Think of it like medieval thrift shopping, only instead of rummaging through boxes of worn out t-shirts, you’re flipping through 6th century bibles. And that 1500s-style thriftiness of one man was the birth of what’s become the most famous book collection in existence today.

During the Second World War, Allied Airmen made their mark on their favorite watering hole. Mosey to the back of Eagle Pub and look up.  Scrawled across the ceiling you’ll find the pilots’ names, squadron numbers, and random doodles, etched with wax candles, petrol lighters, and lipstick.

King’s was founded with grand plans and a royal vision. Unfortunately for King Henry VI, he never got to see his dream come to fruition, hitting a snag when the Wars of the Roses broke out, funding ran dry, and he was eventually deposed. But as these royal affairs tend to go, the next couple Henrys picked up the tab.

The first stone of this grand chapel was laid by a 19-year-old King Henry VI himself, but it took five kings and 75 years to follow before the last stone was laid and the chapel was completed.

Although relatively poor in its early years, the College soon gained prominence within Cambridge and is now one of the more academically successful institutions. Its most celebrated alumnus is Elizabethan playwright Christopher Marlowe. Known for his works “Tamburlaine” and “Doctor Faustus”, Marlowe enjoyed great fame during his career as a dramatist and poet. It is also said that he collaborated and influenced Shakespeare.

This college got off to a rather dark start. Trinity Hall was founded in 1350 in response to the devastation of the Black Death. Cambridge used the new college to rebuild the decimated clergy — and rebuild they did.

Market Square has been the center of Cambridge life since the middle ages, where city dwellers and nearby villagers would gather to trade, gossip, and witness various forms of medieval public punishment (we won’t get into specifics, but don’t let your mind wander too far, if you know what we mean…)

A green-thumbed priest moved the gardens to their current site, designed to host a sprawling tree collection. But it was his progressive notions of variation and the nature of species that lit up the imagination of his famous protege, one Charles Darwin.